A detailed discussion - how to construct and use the Circle Of Fifths
Includes discussions and video tutorials
For those who prefer to read offline, have this tutorial sent to your mailbox. See the form the end of this tutorial. 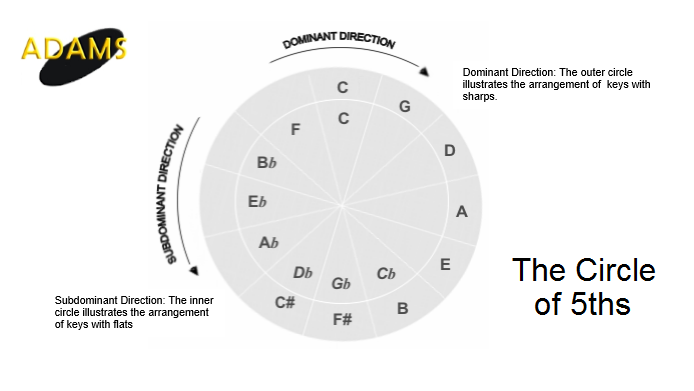 There is nothing mysterious about the circle of fifths. Think of the Circle of Fifths as chart of major and minor scales arranged vertically. The chart is subdivided into two sections the upper section of the chart tabulates the scales that have sharps, in their key signatures. The lower section of the chart tabulates scales that have flats, in their key signatures. Our discussion includes videos and textual content spanning the following topics :
The unit of measurement
The enharmonic
The chromatic scale
The major scale and its unique tonal structure
The intervals of a perfect 4th and 5th

THE UNIT OF MEASUREMENT IN MUSIC

The semitone and tone are the terms used to describe the measurement of the interval between two notes. For example, C to C# is a semitone, while the interval, C to D, is a tone. C first moves to C# then moves over to the note D. C to C# is the first semitone, while C# to D is the second semitone. Two semitonesi, equals to a tone, therefore the interval C to D has a measurement of two semitones or 1 tone. (semitone + semitone = tone). Spend time on the piano work out some tone and semitone intervals for yourself.

Join our theory of music or practical classes 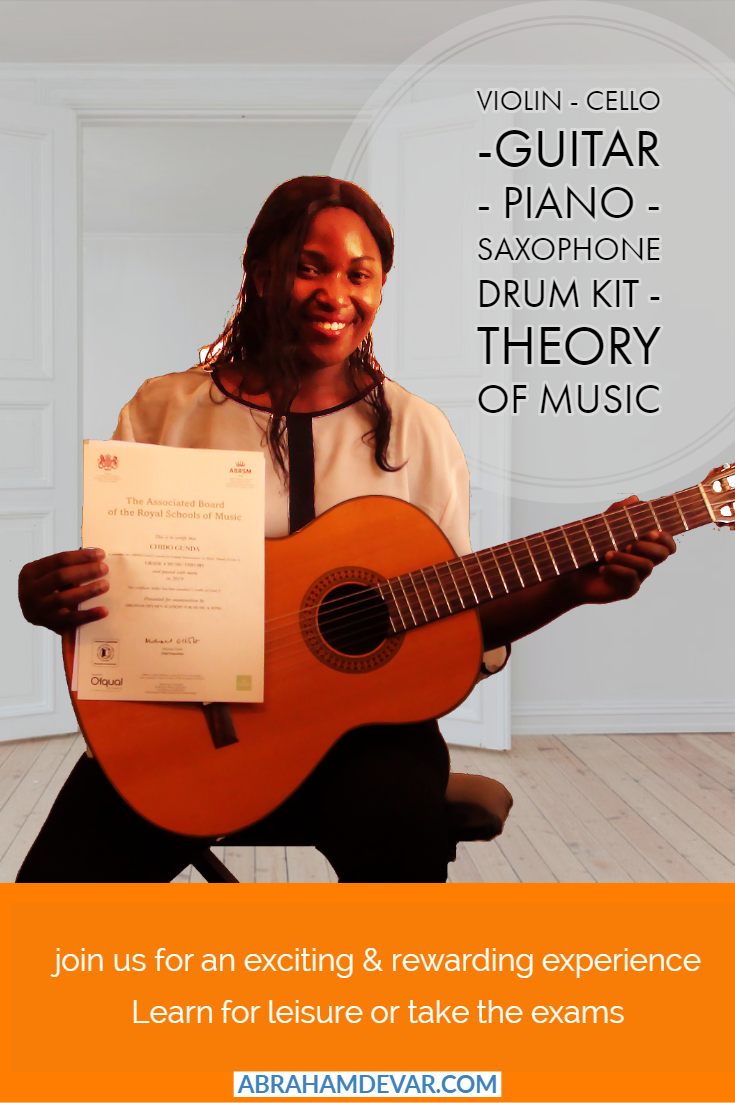 There are other ways to play the chromatic scale for guitar. In the illustration above we used a horizontal approach to demonstrate how the chromatic scale of C, is played on a single string. It's much easier to see and appreciate especially for beginners.

The Tonic solfa, is an arrangement of the music scale into syllables such as, do, re, mi, fa, so, la, ti, do. Generally music notes would be symbols or alphabets. The tonic solfa is not essential to our tutorial, it will however be of interest to singers and choirs.
Back to top 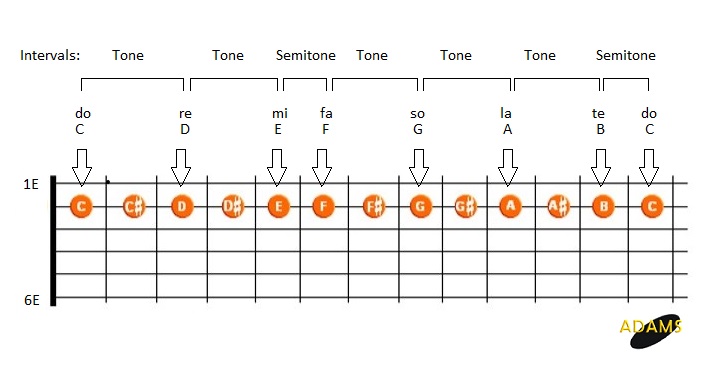 Book for our certificate courses in Theory of Music

CONSTRUCTION OF THE G MAJOR SCALE

The G major scale, just like the C major scale, will have 7 unique notes. G A B C D E F# G. You are probably wondering how we arrived at F#. Let's take another look at the guitar. In this example we will use the third string of the guitar, which is tuned to G. We start by looking at the chromatic scale for G and see how the G major scale is extracted from it. 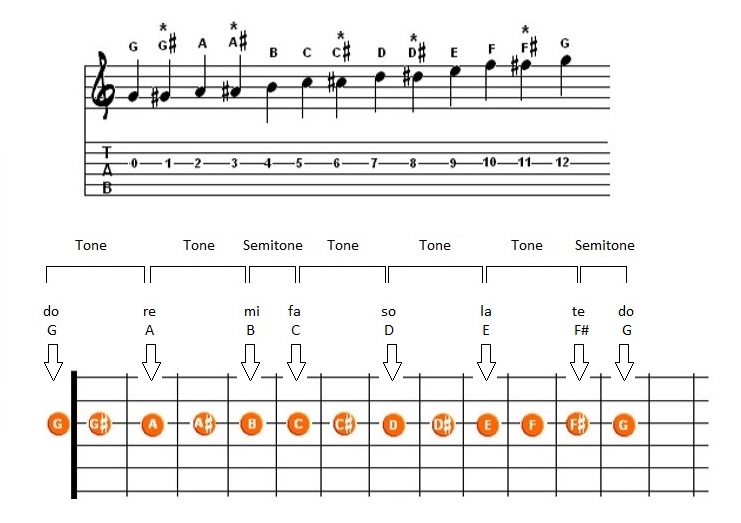 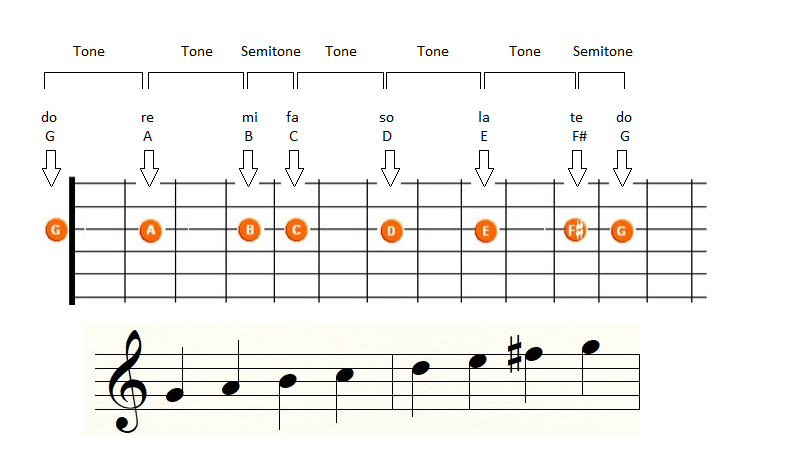 From the illustration above, you will notice that the 7th note is, F sharp and not F natural. This is done to maintain the interval of a tone between the 6th and 7th note. The interval between the 7th and 8th note becomes a semitone as a consequence. In order to build the circle of fifths chart, you will need to remember that the scale of G major has one sharp, which is F#.
Back to top

INTERVALS OF A PERFECT 4TH AND 5TH

It is important to know and understand intervals of a perfect 4th and a perfect 5th. As mentioned earlier, intervals are measured in semitones. This video explains intervals of a perfect fourth & perfect fifth, it further demonstrates how these intervals are used to construct the circle of fifths / chart of major scales. We are finally ready to build the chart of scales.
The perfect fourth interval is measured as indicated below. The scale is C major.:
C   D   E   F is a fourth and measures 5 semitones.The perfect 4th interval will always measure 5 semitones.
The perfect fifth interval is measured as as indicated below. The key is C major.
C   D   E   F   G, is a fifth and measures 7 semitones. The perfect 5th interval will always measure 7 semitones.

Register for our certificate courses in Theory of Music

Create a chart with scales that have sharps

The center of our circle of 5ths chart will be the C major scale, with which we are already familiar.
C major is our first scale. Find a perfect 5th in the C major scale starting from the tonic, and we arrive at G. The next adjacent scale or key is, therefore, G major. Go back a little and re-read the section on the tonal structure of G major and you will see that it has one sharp, namely, F#.
Use this method to calculate each adjacent scale. The fifth of each scale becomes the tonic degree of the next and adjacent scale. Take a look at the illustration below to see how the chart is constructed.

Create a chart with scales that only have flats

The center of our circle of 5ths chart will be the C major scale, with which we are already familiar.
C major is our first scale. Find a perfect 4th in the C major scale starting from the tonic, and we arrive at F. The next adjacent scale or key is, therefore, F major. Work out the tonal structure of the F major scale and you will see that it has one flat, namely, Bb. Use this method to calculate each adjacent scale for the chart of scales with flats.. The fourth of each scale becomes the tonic degree of the next and adjacent scale. Take a look at the illustration below to see how the chart is constructed.

Book for our certificate courses in Theory of Music

The Table of Scales

Instead of the circular arrangement of scales, here they are arranged vertically, with the scale of C major at the center.
Back to top 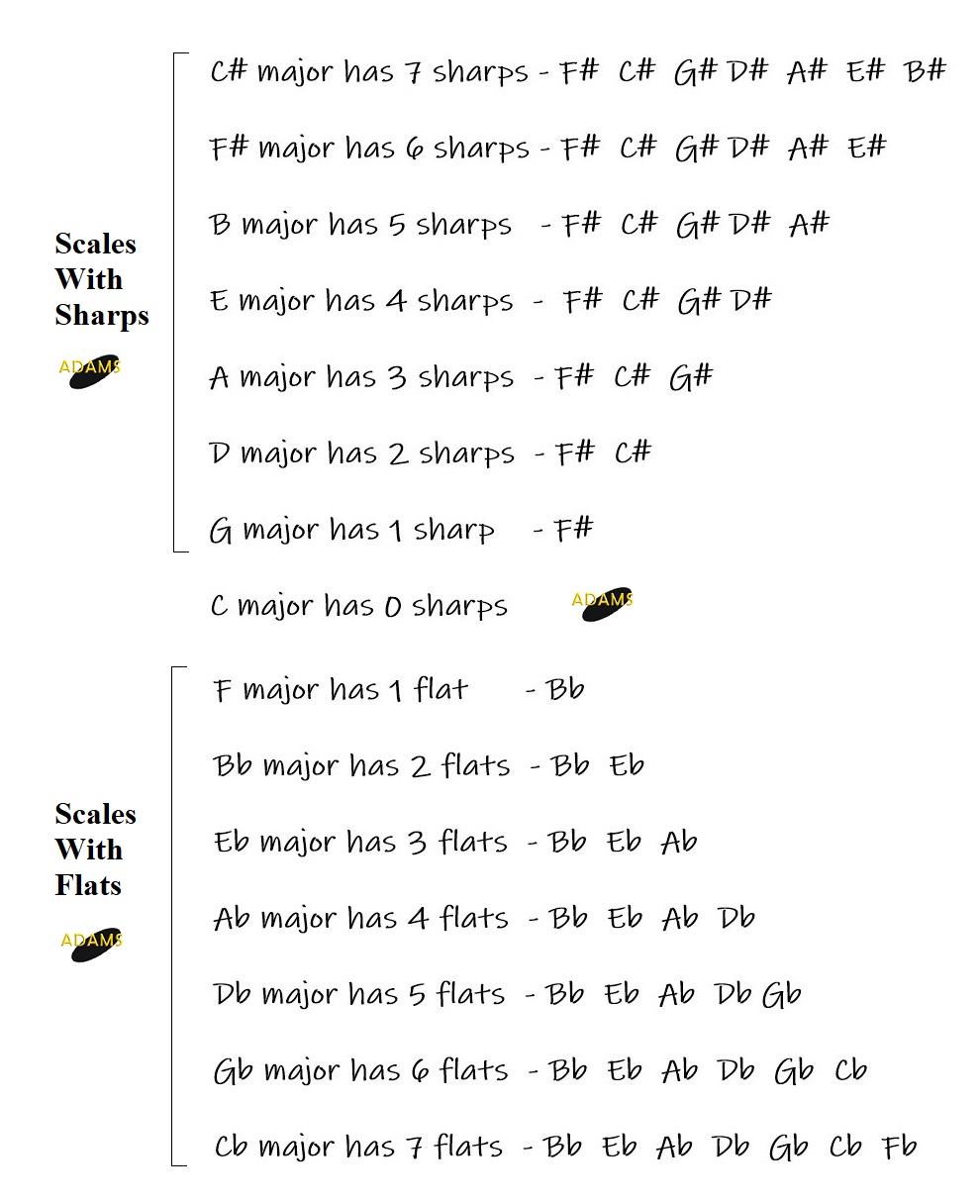 Minor Scales and the Circle of 5ths

C   D    E   F   G   A     B    C
1   2    3   4   5   6     7    8
Another way to find the relative minor in a major scale is to count 3 notes back from the 8th note. Bear in mind that the size of the 3rd interval is a minor 3rd with a measurement of 3 semitones. The size of the interval is important.
The relative minor scale is included in the updated table below. A few things about minor scales:
Minor scales have the same key signatures as their relative major scales
Minor scales will have additional sharps and flats that are deployed as accidentals and do not form part of the key signature, examples of these are the harmonic and melodic minor scales. 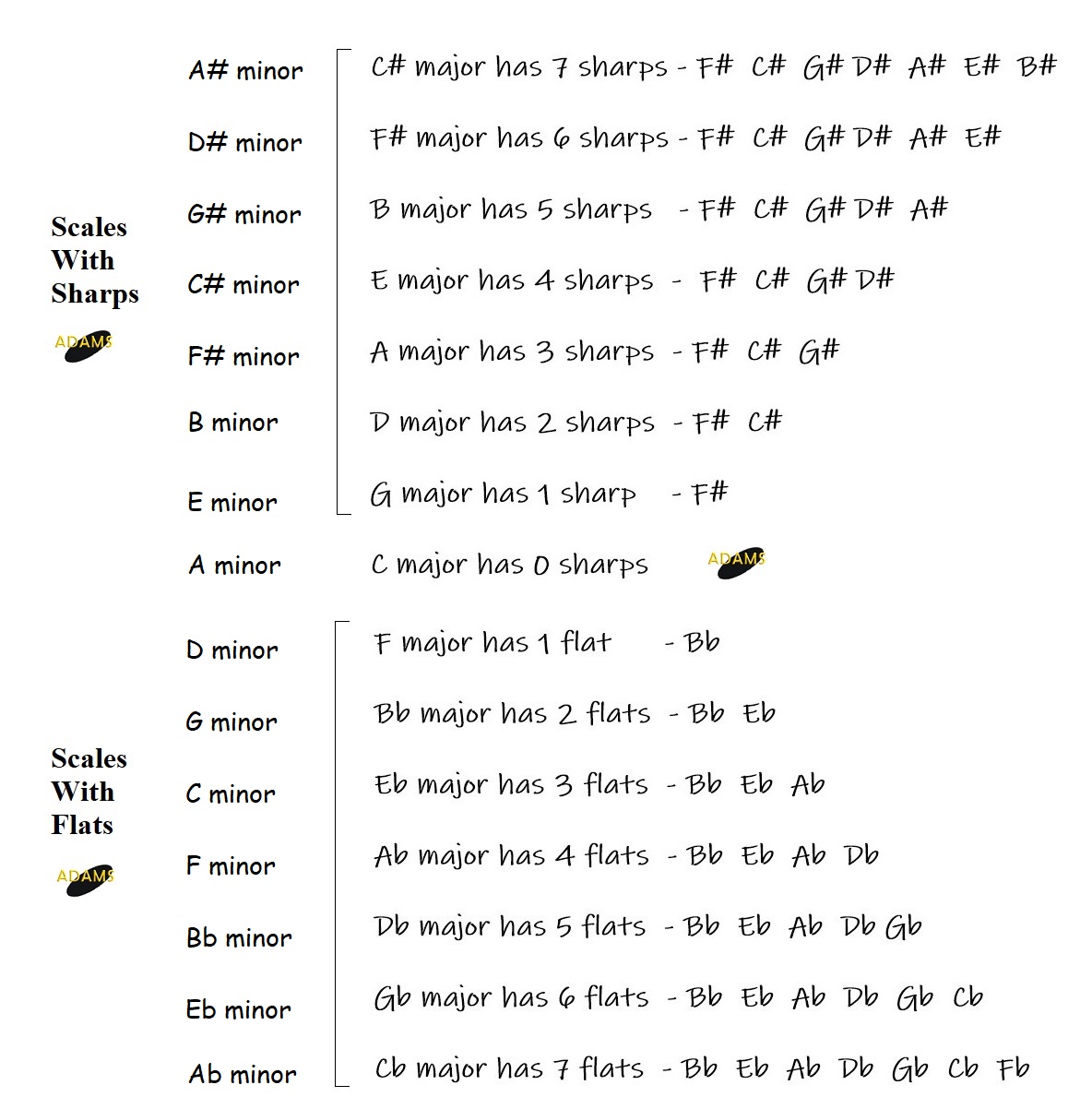 After reading the notes and discussion above, you will be able to play from any major and minor key as required. Transposing chords are easy. With the information above you will be able to quickly transpose a set of chords to any key. In a subsequent discussion we will discuss a few examples for your benefit.
The key signatures above can look ominous. It is necessary to learn them and to play the scale ascending and descending, and repeat the names of the notes while playing, in order that you memorise them. Remember that the scales acquire sharps or flats due to the adjustments made to its notes, which maintain the tonal structure of major scales.
Back to top